Causes of fatigue after sleepEveryone knows the feeling of fatigue, lethargy and some irritability, which sometimes happens after sleep. What is the reason for this, and is there any explanation for this? Certainly yes.…

First aidEveryone should know how to give first aid to someone who needs it. We are not talking about a full medical understanding of certain difficulties associated with various types of…

How doctors in the US feel about electronic medical systems: a study 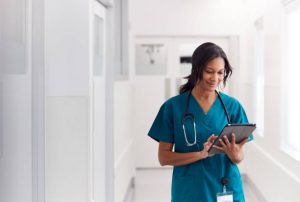 In March of this year, Stanford Medicine, together with The Harris Poll, conducted an interesting study in which they tried to find out exactly how doctors in the United States relate to EHR systems – analogues of medical information systems in Ukraine (MIS).

The study involved 521 primary care physicians, that is, family and general practitioners, as well as interns. All physicians at that time were licensed to practice medicine in the United States and had been using HIS for at least a month.
Understand but want to improve

As the study showed, in general, American doctors understand the value of medical information systems, but want a number of improvements in their work. For example, 66% of physicians are satisfied with the MIS they use. And 18% are even very satisfied.

Six out of 10 physicians surveyed agree that HMIs have led to improved patient care, both overall (63% of physicians) and within their practice (61%). And only 3% of doctors do not understand why they need a medical information system.

At the same time, seven out of 10 study participants noted that the use of HIS increased the total number of working hours of the doctor. For example, out of 31 minutes that are spent on average communicating with a patient, 19 minutes are spent filling out an electronic patient record. Therefore, 69% of physicians disagree that MIS has strengthened their relationships with patients.

It is also important to note that almost half of primary physicians (44%) say that the main value of their medical information systems is the digital storage of information, while 8% of those surveyed cite key clinically related elements such as disease prevention / treatment (3%) , clinical decision support (3%) and patient interaction (2%).

49% of doctors who see their patients in the office believe that filling out an online patient record distracts them from their main work (examinations and communication with the patient) and reduces clinical efficiency. And the vast majority (71%) of the respondents agree that the use of MIS, to a large extent, contributes to their professional burnout, as well as to the fact that they become dissatisfied with themselves.
What needs to be improved in EHR in the near future

72% of American therapists think that improving MIS should start with improving the systems interface. In their opinion, this can best solve the problems that exist with electronic records in the near future.

67% of doctors believe that it is necessary to find a solution to the problem of compatibility of different medical information systems with each other. In particular, seven out of 10 respondents believe that addressing this problem should be a top priority for IIA developers in the next decade.

Also important, 43% of physicians are asking developers to improve predictive analytics to support disease diagnosis, prevention, and public health management. In other words, they want to use MIS not only for data storage, but also as a medical tool.

32% of physicians want financial information to be integrated into HIS. This will help patients understand the costs of their care options.

What doctors want from MIS
1. Maintaining high quality online patient records
2. Intuitive, clear interface
3. Clinical decision support at the time of patient admission
4. Identification of patients at high risk of disease
5. Improving the quality of patient medical records
6. Patient access to electronic medical records and the ability to share them with other clinics
7. A tool to help them deal with bookkeeping, income and expenses
Important things that are not yet satisfied by the IIA
1. Changes or adaptations of systems in response to user feedback (support)
2. Intuitive, clear user interface
3. Improve patient-doctor interactions
4. Coordinated care for patients with complex health conditions
5. The ability to determine that the patient is in a high-risk group
6. Clinical decision support
7. Exchange of information with all clinics
8. High quality patient record keeping, data archiving
9. Management part
10. Involving patients in their prescribed treatment plans using mobile technology
11. Providing patients with access to their medical records
12. Integrate financial information to help patients understand the costs of their care options
What are the main obstacles to future changes doctors see

Half of the doctors surveyed in the United States believe that IT in healthcare is too fragmented and isolated. And 30% of doctors say financial interests in healthcare are too ingrained to change the status quo.

In Hospitals MIS is valued more than in polyclinics

The study also showed that doctors who work in US clinics value having access to digital patient information less than those in hospitals.

How doctors in the US feel about electronic medical systems: a studyIn March of this year, Stanford Medicine, together with The Harris Poll, conducted an interesting study in which they tried to find out exactly how doctors in the United States…