Continuing professional development (CPD) for doctors: there is no limit to perfectionWhat will change? The principle of continuous training of doctors is a common practice in the developed countries of Europe, America and Asia, in particular in the UK, USA, Poland,…

When can a doctor refuse to see a patient? 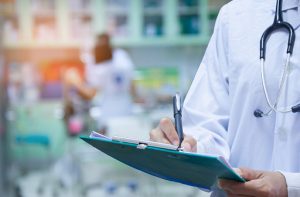 The situation when a medical worker refuses to treat a patient is not uncommon in Ukrainian medicine. But more often doctors do not know their rights and tolerate inadequate patients to the last. And only a few turn to chief doctors or lawyers for help. We decided to help doctors, and especially beginners, and remind about what cases a health worker can refuse to treat a patient and what conditions he needs to fulfill in order to protect himself from legal prosecution.
Routine rules

According to the norm of art. 34 of the Fundamentals of Ukrainian Legislation on Health Protection, the doctor has the right to refuse further management of the patient if he does not comply with medical prescriptions, doctor’s recommendations or the internal regulations of the healthcare institution.
For example, a patient came to an outpatient facility that is open from 8:00 earlier and saw that the staff was already walking in the hospital. He starts knocking on the door and demanding to be taken in. The doctor is usually not required to do this.
How should he take the patient, behaves incorrectly, because he is in a state of alcoholic or drug intoxication.
It also often happens that the patient refuses to stay in bed, take medication, etc.
In this case, the health worker is not responsible for the health of the patient and may refuse to further manage the patient. However, provided that it will not threaten the life of the patient and the health of the population!
Clause 3.4 of the 2009 Code of Ethics for a Doctor of Ukraine contains similar provisions: with the exception of cases of emergency care, a doctor has the right to refuse treatment of a patient if he is sure that there is no necessary mutual trust between him and the patient, if he feels himself insufficiently competent or has the necessary for treatment opportunities and in other cases, if this does not contradict the Physician’s Oath. In such situations, the doctor should inform the patient about this and provide him with appropriate recommendations.
Ethics

It is also not the doctor’s responsibility to listen to insulting phrases addressed to him or tolerate unethical behavior of patients. The law, and in particular art. 297 of the Civil Code of Ukraine, protects his right to respect for dignity and honor, just like any other person.
In addition, as lawyers advise, it is desirable to enshrine the right to respect the honor and dignity of a doctor in the regulations of the medical institution itself and acquaint the patient with them even before the start of the appointment.
However, in life, as doctors say, everything is more difficult, and even state institutions refuse patients.
In particular, a bad “reputation” of the patient among doctors can become an example for refusal to provide services. Such cases sometimes happen in private medical institutions when doctors find out how unethical patients have behaved towards colleagues in other hospitals.
However, both doctors and lawyers emphasize that refusing to help a patient in an emergency is a criminal liability! And this should not be forgotten.
How can a doctor protect himself?

All cases of refusals to admit and treat patients must be recorded by the doctor. So that later he would not be accused of a subjective attitude towards them.
In particular, the doctor must collect as many eyewitnesses as possible of his communication with the patient. It can be representatives of security, colleagues, staff, other patients. After all, any witness can be, but the court does not necessarily take into account all the evidence.
It would be nice to make an audio recording of the conversation between the doctor and the patient. If an offense is committed against a doctor, then the open use of a voice recorder with an indication of the time and purpose of the recording is legal, and the recordings can become material evidence in court.
As a last resort, you can call the police.
Also, the doctor needs to make an appropriate entry in the medical records and write a memo to his supervisor, where he states the essence of the misunderstanding. If necessary, you can create a collegiate commission.
In the future, if the doctor does everything right, it will be possible to file a complaint with the prosecutor’s office or an application to the court. In the claim, it will be possible to demand fair compensation and note the amount of material compensation for the moral damage caused.
Remember sick leave

In cases where the patient ignored the recommendations of the doctor related to treatment, and also did not follow the schedule of visits to the doctor, appeared for an appointment in a state of intoxication or under the influence of narcotic substances, went to work without the permission of the doctor, and also visited other medical institutions that did not having warned the doctor about this, the latter must indicate in the sick leave a specific type of violation that the patient has committed.

How to get rid of black dotsEveryone wants to be beautiful and have an attractive appearance, but many factors can prevent this. Today we will talk about black dots that appear on the surface of the…