How to convince the patient to follow the doctor's orders?Medical reform is in full swing in Ukraine. Clinics purchase computer equipment, install MIS, doctors master the work with professional applications and teach patients to communicate in instant messengers. But…

How to convince the patient to follow the doctor's orders?Medical reform is in full swing in Ukraine. Clinics purchase computer equipment, install MIS, doctors master the work with professional applications and teach patients to communicate in instant messengers. But… 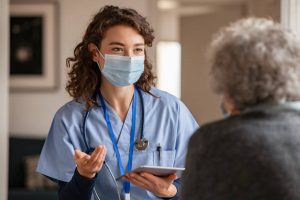 Surely each of you has heard the expression: “All diseases are from the nerves.” And probably most people agree with that. However, as soon as we happen to get sick, we immediately forget about this statement.

We strive to get the most physical help from a doctor as soon as possible. When a person recovers, he again does not mind arguing that all diseases are from nerves.

In general, is this statement correct? And if so, then why do people treat him so lightly? Statistics show that at least 70% of diseases are provoked by stress, emotional distress and excessive emotions. That is, yes, – “because of the nerves”

What is psychosomatics
In medicine and psychology, there is such a direction as psychosomatics. It studies the influence of psychological factors on the occurrence and course of somatic, that is, bodily diseases. The word psychosomatics is translated from ancient Greek as ψυχή (psyches) – soul and σῶμα (soma) – body.

The idea of ​​the influence of psychological factors on human health is very ancient. Reflections on this topic can already be found in Hippocrates and Aristotle.

Plato wrote in one of his dialogues:

“Just as one should not try to treat the eyes separately from the head and the head apart from the body, so one should not treat the body without treating the soul, and the Hellenic doctors fail just then when they do not recognize the need to take care of the whole … Everything is good and bad things are generated in the body and in the whole person by the soul, and it is from it that everything flows … That is why it is necessary first of all and mainly to treat the soul, if you want both the head and the rest of the body to feel good.

It is known for certain that strong emotions are always accompanied by the release of certain hormones, which directly affects our heart, blood vessels, endocrine system, breathing, etc.

Moreover, we are talking not only about negative emotions, such as envy, irritation, anger, resentment, hatred, fear, guilt, but also about positive ones.

However, we will consider only negative emotions, since they lead to the development of mental and bodily diseases.

It is worth noting here that psychosomatics is not a matter of faith. That is, regardless of whether you believe in it or not, it exists and affects us quite tangibly.

The fact is that our emotions are, in fact, hormones. And they, as you know, act on everyone in the same way, with a slight adjustment for the individual characteristics of a person.

Why are we crazy?
Have you ever asked yourself why we freak out? For example, in the animal kingdom, this allows you to quickly prepare the body for the two most natural reactions: fight or flight.

What is happening at this moment:

the adrenal glands release an increased dose of stress hormones into the body;
blood sugar levels rise, giving the body more energy;
blood pressure rises to ensure maximum blood flow to the muscles;
hormones significantly increase the work of the heart and make heart contractions more frequent;
the blood thickens and the blood vessels constrict so that in case of injury, the bleeding stops as soon as possible.
And here we come to the most important thing. The fact is that at the hormonal level, our body is not able to distinguish between the stress caused by the attack of an animal in the wild, and the stress caused by a conflict with a neighbor, the anger of a boss or a domestic quarrel.

That is, the body, figuratively speaking, prepares for a fight or escape in exactly the same way as when attacked by a wild beast: our blood pressure rises, blood sugar levels rise, etc. etc.

Now let’s look at this from a slightly different angle.

How our emotions affect health
There are natural emotions that help the body survive in the wild, and there are unnatural ones. And these unnatural emotions not only do not help the body to survive, but directly interfere with this. They are the most common cause of psychosomatic diseases, and it is they who, imperceptibly, gradually cause great damage to our mental and physical health.

Natural emotions – anxiety, fear, anxiety (this is what helps to hide from threatening danger). Irritation, anger and rage – allow you to rebuff the enemy. Of course, you can also get sick from these emotions if you go overboard with them: experience them for a long time or too often. One way or another, but any emotions must have a discharge, let’s say conditionally – an imitation of a fight or running away (for example, sports or any other physical activity).

With unnatural emotions, the situation is quite different. They cannot be discharged so easily, because they do not have this discharge mechanism. That is why they are unnatural and significantly reduce our ability to survive.

What are these emotions? The most common of these are resentment, envy, hatred and guilt.

Some researchers claim that resentment has killed far more people than all other negative emotions combined. And this is far from an unfounded assertion.

How artificial intelligence is used in the development of patient treatment regimens: the US experienceAn AI-assisted pneumonia care scheme has already saved a U.S. clinic $1,356 per patient, reduced hospital stays by two days, and significantly reduced hospital return visits. Flagler Hospital in St.…