Raw food dietA raw food diet is a food system that is characterized by the complete exclusion of heat-treated food. There are a number of varieties of a raw food diet, such…

Medical reformWhat exactly will change and where can I get fresh and up-to-date information? First of all, we are talking about new clinical protocols. The Ministry of Health of Ukraine by…

Panic attack: what is it and how to deal with it 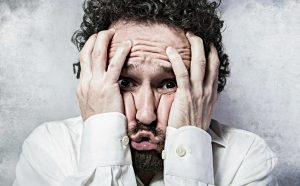 Panic attack – what is it and how to deal with it? Today, many people are interested in this question. In this article, we will look at the symptoms of a panic attack and its types. In addition, you will learn about the causes and consequences of growing anxiety.

What is a panic attack and what are its symptoms
A panic attack is an unreasonable and painful attack of severe anxiety for the patient, accompanied by unreasonable fear, in combination with various autonomic symptoms.

An interesting fact is that the presence of panic attacks (PA) does not always mean that the patient has a panic disorder. PA can be symptoms of somatoform dysfunctions, phobias, depressive disorders, post-traumatic stress disorder, as well as endocrinological, cardiac or mitochondrial diseases, etc., or appear as a result of taking any medications.

The essence of a panic attack can be better understood by the following example. Let’s say you’re watching some horror movie, from which your whole body fetters with fear, your throat dries up and your heart starts pounding. Now imagine that the same thing happens to you, only without justified reasons.

In simple terms, a panic attack is an unreasonable growing fear that turns into panic. It is curious that such attacks are more common in people aged 20-30 years.

Panic attack symptoms:
chills;
insomnia;
trembling in the hands;
increased heartbeat;
fear of going crazy or doing something inappropriate;
heat;
labored breathing;
sweating;
dizziness, faintness;
sensation of numbness or tingling of the fingers on the limbs;
fear of death.
The duration of attacks can vary from several minutes to several hours (average 15-30 minutes). The frequency of attacks – from several a day to 1 time per month.

Causes of panic attacks
There are 3 key groups of factors:

Biological. These include hormonal disruptions (pregnancy, menopause, childbirth, menstrual irregularities) or taking hormonal medications.
Physiogenic. This group includes drug use, alcohol poisoning, heavy physical exertion and long exposure to the sun.
Psychogenic. This category includes people who are hard to endure stress, family problems, the death of loved ones, chronic illnesses, and those who are prone to excessive impressionability.
How to deal with a panic attack
With such attacks, a person should seek help from a neurologist or psychiatrist. A qualified specialist will be able to assess the degree of your illness and prescribe appropriate drugs or exercise.

Your doctor can give you important tips on how to deal with panic attacks on your own. If you learn to nip your fears in the bud, you will prevent them from turning into panic.

There is a technique that helps the vast majority of people suffering from PA:

A few breaths into a bag or any container.
Switch your attention in another direction (count plates, shine shoes, talk to someone).
During an attack, it is desirable to sit down somewhere.
Drink a glass of water.
Wash off with cold water.
Recall poems, sayings, aphorisms or interesting facts, focusing on their pronunciation.