How to inject in the buttockSometimes in life there are situations when it is necessary to give an injection, but there is no doctor nearby. Of course, some agile Homo sapiens can inject themselves. However,… 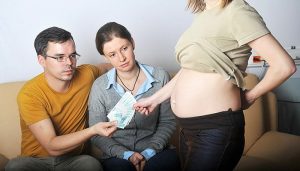 Since the beginning of the 21st century, science has made a huge breakthrough in all areas of knowledge. Medicine, of course, is also developing rapidly. In this regard, there was such a thing as surrogate motherhood.

What it is, and how the process of surrogate motherhood takes place, we will tell in this article.

Surrogacy is an assisted reproductive technology, in the application of which three people are involved in the conception and birth of a child:

genetic father;
genetic mother;
surrogate mother.
The genetic father is the man who provided his sperm for fertilization.

A genetic mother is a woman who has provided her egg for fertilization.

A surrogate mother is a woman of childbearing age who has agreed, on a reimbursable or non-reimbursable basis, to carry and give birth to a child from genetic parents and does not claim to be the mother of this child.

I must say that surrogate motherhood in the modern sense is a fairly new phenomenon not only in Russia, but in the whole world.

In the Russian Federation, laws regulating surrogate motherhood appeared only in 2011-2013.

History of Surrogacy
In one form or another, surrogate motherhood has existed for a long time. There are cases in history when childless families resorted to the help of slaves or ordinary women to procreate.

One of the most famous ancient cases is the birth of Ishmael, mentioned in the Bible (Genesis, chapter 16). The eldest son (first-born) of Abraham was born from the slave Hagar, and the initiator of this was the lawful wife of Abraham – Sarah.

At the same time, a childless woman who resorted to the help of a surrogate mother had to be the first to pick up a born baby in order to thereby demonstrate her undeniable right to a baby.

Criticism
Naturally, surrogate motherhood has a lot of both supporters and opponents.

On the one hand, there are voices of approval of this technology as a unique opportunity to have children for those who, for one reason or another, cannot bear and give birth to a child on their own.

On the other hand, sharp criticism of this phenomenon is heard, as something unnatural and contrary to human nature.

The Russian Orthodox Church gives an unequivocal critical assessment of this procedure:

“Surrogate motherhood” traumatizes both the pregnant woman, whose maternal feelings are violated, and the child, who may subsequently experience a crisis of self-consciousness …

Surrogacy in Russia
In Russia, surrogate motherhood is regulated by the following legislative acts and regulations:

To register a child (children) born by a surrogate mother, parents must submit the following documents to the registry office:

medical birth certificate;
consent of the surrogate mother;
a certificate from the IVF clinic about who the biological parents of the child are.
In 2015, Senator Elena Mizulina proposed a ban on commercial surrogacy, equating it with human trafficking.

The price of surrogacy
Prices for surrogacy depend on many factors. Usually, the total cost for the entire process, including all medical expenses and the surrogate mother’s remuneration, ranges from 1.2 to 2.5 million rubles.

However, today, due to the increased number of those wishing to provide their services, the prices for surrogate motherhood have slightly decreased, and can amount to 600-800 thousand rubles.

This article about surrogate motherhood is presented for informational purposes only. If you liked this post, share it on social networks.

Bad breathToday we will consider an interesting topic related to medicine in general and dental health in particular. We will talk about bad breath, which is scientifically called halitosis. Nepriyatnyiy-zapah-izo-rta-1 We…